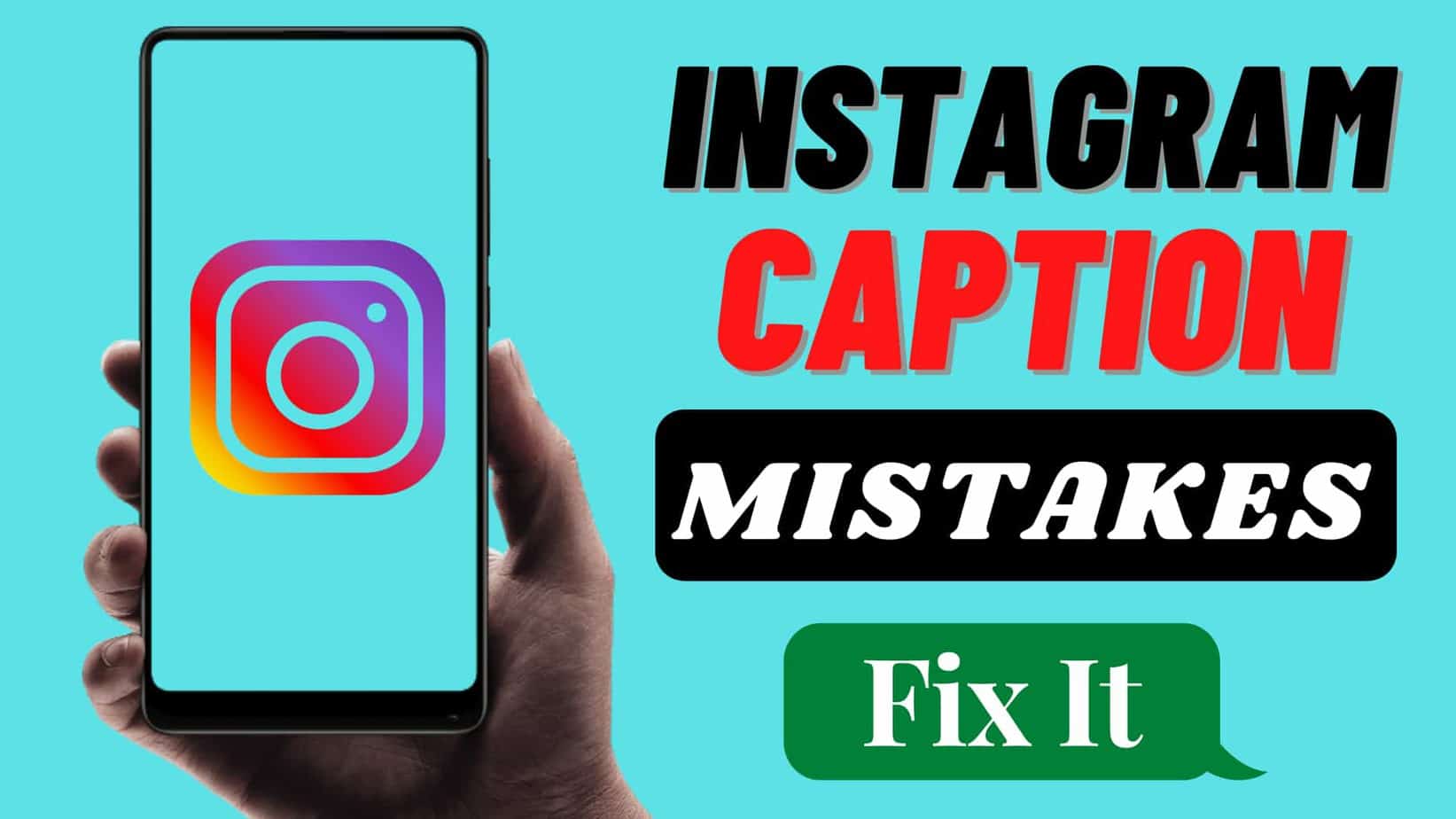 I want to go over via top Instagram caption mistakes that you aren’t even aware that you’re making that stunting your Instagram growth.

I really want to focus on the non-obvious mistakes. These are mistakes that I have a feeling. A lot of you guys are making that nobody talks about.

And that’s why this article is going to be super fun and super special. Because I know that after reading this post, you are definitely going to change something in your Instagram strategy. No doubt.

I consistently see people making when they are writing their Instagram captions. I constantly see how challenging it is to write engaging and captivating captions for your audience.

we’re going to talk about the six biggest Instagram caption mistakes that I feel like people make that’s really affecting their growth and how they can actually improve getting more followers getting more views on their Instagram account.

These mistakes are just all over the place and a lot of people aren’t even realizing how important their captions actually are.

So if you want to learn what these mistakes are and how you can improve your Instagram account and their growth then keep on reading this post.

We found this blog post on this topic which is a really awesome and great post written by Theboostapps.com

The first biggest mistake that people make on Instagram is un-meaningful captions.

Now, what do I mean by this?

I mean that the captions that they’re putting on their posts don’t actually relate to the photo they’re not actually meaningful. They’re not going to mean something to your audience and there’s no actual reason for the caption.

Now you’ll probably see this a lot of times when it could be random photo that someone’s taken and then they’ve put in like a song lyric or a caption that they like or something.

They just wanted to put them there because they thought it it’s cool and they wanted to chuck it in with their post some people can get away with this.

A lot of people get away with it if they’re doing sexual type photos or something that’s just really eye-catching. You can probably get away with an un-meaningful caption.

But at the end of the day

Of course to find it interesting enough to want to see more of what that post is about. The only way to do this is with a meaningful caption.

There’s no meaning behind your post and you’re gonna have no meaningful captions to go with it. So you really need to be mindful of why you’re actually posting that in the first place?

You really need to think about that. Think about what your audience is going to gain from that post and really just be mindful of what you’re posting.

Of course, once you’ve posted something that you know is meaningful and is valuable then you’re going to have a caption.

You really need the caption to really take away the actual value behind that post and why you’ve posted it in the first place so really just making sure that every single caption relates to the photo.

And that it’s something that’s meaningful, purposeful, and add value to that photo and really get people interested in that post.

Now the second biggest Instagram caption mistake that people make is no engaging hook and what I mean by this is?

So you make sure that there’s some kind of hook involved that’s going to really interest people and it’s really going to show them why they should be interested in that post.

Something that’s really engaging so that comes down to the photo that you’re posting. The actual post needs to be engaging something exciting. Something that they want to go stop and go hey what’s this about something.

That’s really going to grab their attention but you also need to make sure that your caption is also engaging. This is all about the captions.

After all so you need to remember that even if you have the best photo in the world if there’s not an engaging caption not no engaging hook to keep them interested and to make them want to read more then they’re not likely to be interested in that post.

So you need to make sure that your hook is engaging lots of different examples on Instagram of this where I would recommend making sure that you have an engaging hook.

Making sure that it’s something that’s going to grab their attention but also being mindful that it’s only going to show the first two lines of what you’ve actually written on that post.

So making sure that your hook is going to grab them in the first sentence or two. This is interesting I want to find out more and they’re going to click on that post.

Third biggest mistake is non-existent spacing and what I mean by this is you’ve gone ahead and you’ve written yourself an amazing caption.

It’s got detail it’s got everything in there that you wanted to post and you’re really happy with the content. Here’s the problem it’s just one big as paragraph that no one’s really going to be interested in.

They’re going to look at that and they’re going to be like I can’t be bothered reading that but if you space it out properly. You want to make sure that the captioning is spaced out correctly no more than two lines per paragraph.

So it’s just easier to read more enticing to read when you look at it just looks tidier and easier to read and more engaging as opposed to just one really big paragraph.

It’s really going to put your audience off because they look at it and they just be like I can’t be bothered reading that so spacing is hugely important to get your message across and to making sure people that are more likely to read.

It is actually the presentation of your captions. Make sure the spacing is correct like I said no more than two lines per paragraph.

To really entice the reader to read on and want to read into that caption and to actually read that amazing content that you’ve done there’s nothing worse than spending so much time on your content but then you put in no spacing no presentation that people just go right past it because they have no reason to want to read it.

So you need to make sure spacing is really important there are some cool little applications that you can use that.

I would highly recommend and it just spaces it out all for you and then just copy and paste that onto your Instagram account so make sure that you space it out correctly to get people to want to read your caption.

Now the fourth biggest Instagram caption mistakes that I see that you may think sounds a bit silly but in my personal preference that’s my opinion so you might not agree with this but I reckon need to make sure that you don’t have too many emoji.

Too many emoji in my opinion is distracting. It’s off-putting and it just makes it look like it’s a load of garbage that’s right. You can’t use too many emoji it’s just going to distract the viewer.

They’re less likely to want to read on because they’re just going to be like. This is probably some kind of joke or something that’s just not worth it.

They’re going to completely divert someone off the point of your caption could potentially have a viewer not interested just because you used too many emoji.

A lot of people think if I add lots of emoji it’s going to gain people’s attention but unfortunately, I find it does the exact opposite and it just hasn’t worked.

So in my personal opinion, I’ve made this mistake many times don’t use too many emoji because it’s actually going to do the opposite of what you want it to do.

It’s just going to divert people and distract people which is not what you ideally want to do. So make sure you don’t use too many emoji in your next caption.

The fifth biggest Instagram caption mistakes is the caption is all about meme me. Make sure that your caption is actually something that people can relate to.

I mean in a way you can tell a story about yourself and how you may have overcome that fear that hurdle. Whatever it might have been you tell your story and how it happened in.

But unless you portray it in a way that’s actually going to add value to the audience and they can actually look at themselves in your shoes then a caption.

So remember that every time you’re posting something really think about who it’s for and how they’re going to gain value.

No Call To Action

From number six and I probably think this is the biggest Instagram caption mistakes that a lot of people make this they have no call to action and in my opinion it’s something that just gets overlooked.

You don’t really think about but it’s a wasted opportunity. You got a whole lot of audience and you’ve gained all these people coming in and they’re really interested in your post and you didn’t take the opportunity.

So you really want to make sure that there’s some kind of call-to-act that allows them to engage even more and hopefully get them to follow your account.

So making sure that it’s something as simple as:

It is a great way to ensure that more than likely you’ve got to stick around and hopefully check out more of your posts and hopefully follow your account.

So make sure that you’re taking advantage of not only getting people to be interested in your post but taking it even further and putting a call to action.

It’s as simple as that so make sure that you really take advantage of that to have a call to action at the end of every single caption so you don’t miss out on any wasted opportunity.

So, guys, I hope you guys found this article helpful. Make sure to share it because it really does help the blog to grow and I would really appreciate it.

Also, comment down below if you found you’ve made any of these mistakes I would really like to hear your guy’s opinions.

If there’s anything you agree or disagree with let me know in the comment section down below.

I’d love to hear you guys’ thoughts if you do enjoy these kinds of posts. Be sure to bookmark this page. So you don’t miss out on the future posts on this blog.