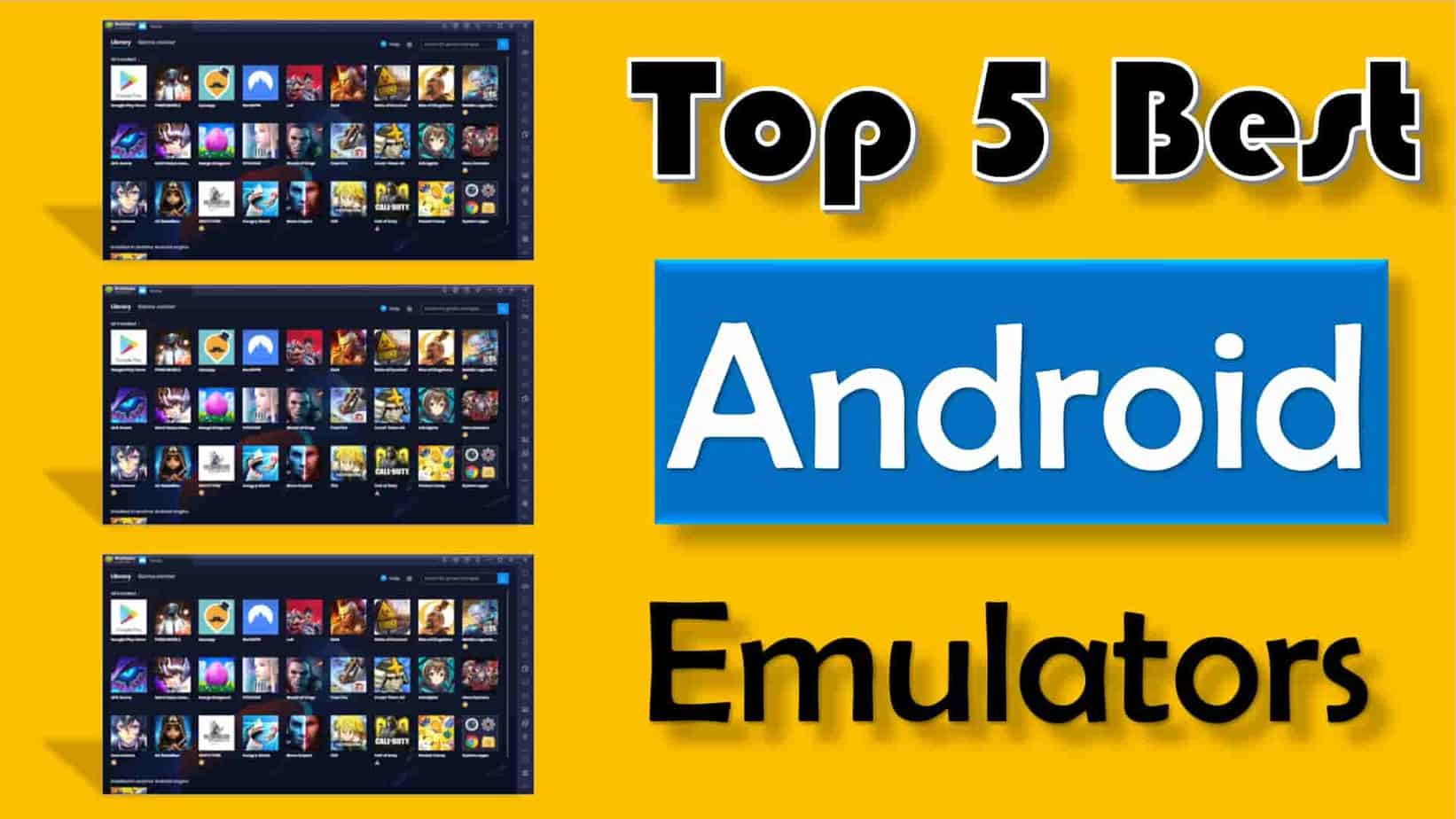 Super guys welcome to TricksFly daily tech tips and in today’s article, we’ll learn what are the best Android emulators for Windows PC and Mac. Android emulator is a piece of software that can emulate the Android operating system.

It’s a piece of software that’s installed on a PC or a Mac and inside it. It can install and run Android applications just like you would on an actual Android device and these best android emulators are popular mostly among gamers who enjoy playing a hundred games on the bigger screens of their computers and also the general economic advantages of using a computer especially when it’s a desktop so to use an Android emulator on your computer you have to install it first.

Using the best android emulator is a great way to access Android apps on your computer. Many of you guys, use an emulator for gaming to be able to use their keyboard, mouse, or game controller. You can also run other types of Android apps as well with so many emulators.

Now it’s a question which Android emulators to choose that provides us a great experience for the Android gaming and access to Android applications.

Disclaimer: Before diving in the post, You must know that this article only for educational purposes and nothing else. We don’t encourage nor support hacking or such activities. TricksFly.com does not own these Apps/APKs or websites, neither developed nor Modified, and also TricksFly.Com does not directly or indirectly link with these apps or websites. We just providing the link already available on the internet. TricksFly.com is in compliance with 17 U.S.C. * 512 and the Digital Millennium Copyright Act (DMCA). It is our policy to respond to any infringement notices and take appropriate actions. If your copyrighted material has been posted on the site and you want this material removed, Contact us.

We have a Nox Android emulator. This is a really stable Android emulator like the angel amateurs up till now here we have the latest version 6.6.0 and it supports Android 4.4.2.

This is one of the best and powerful Android emulators with so many features inside it like other Android emulators. It comes with built-in Google Play Store so you can play all of your favorite Android games and applications.

When it comes to gaming Nox is one of the most stable, smoother, and fastest Android emulators in the market. Nox player has almost all of the useful features which can be selected from the right side including full-screen, key set for keyboard control, multi-drive, etc.

Here in the Settings icon where we can see game settings where we can change the frame rates of the games you want to play.

Genius will take effect after restarting. In addition, you can change the theme by selecting the t-shirt icon by these four. Nox player is absolutely free like ND blue sticks or KO players it is also available for Mac OS users.

This emulator support along with a mouse, keyboard, and gamepad. MEMU Player is totally free to use all of the options that are commonly familiar to use are at the right side of this emulator.

In order to have multitasking in this emulator select this multi menu icon.

In this window at the bottom you will see a new option now it’s your choice you can pick either Android 4.4 or default Android 7.1 and 7.2 is the newest so I will recommend you to select that one.

Then you need to click on the start so then it will open a new window for MEMU so now you can have your apps running simultaneously on your MEMU Android emulator.

KO-player whose main focus is gaming. It allows you to record your gameplay and upload it wherever you want it. It also allows for key mapping to emulate a controller with your keyboard.

When you first launch a ko-player it will ask which mode that you want and maximize game performance. Select speed mode if you’ve run into any issues after starting ko-player you can switch to compatible mode later on in settings along the left you have several options here at the top selecting the keyboard icon will let you edit the keys for your keyboard.

If you’re using a game controller you can activate it and map it to your preferred layout to switch from landscape to portrait mode select the rotate screen icon you’ll also find other options for taking screenshots, recording, and side loading apk.

Many of the Android emulators you have full access to the Google Play Store to install apps just use caution like you would on your phone or tablet when choosing which apps to install unfortunately on the home screen the app icons can’t be moved. ko-player is completely free but like most emulators, you’ll have to deal with the occasional ads.

Andy Android emulator is one of the most popular Android emulators it’s been around for many years and he has been recently updated to Android Nevada. It has a ton of features including your phone as a controller, MacOS, compatibility, keyboard mapper, and many more.

One of the great features of Andy I really like it is safe to use than other Android emulators it has built-in antivirus and Malware security systems. It is one of the safest android emulators to use when you open Andy the main interface will be shown to you like this look at the interface.

It closely resembles Android holding the right click on Mouse will lead to this interface where you will be able to change wallpaper you may use your favorite weird kids and you will get a bunch of settings options.

When you click on this icon it will show you all of the apps installed on this emulator, in addition, you can use screen rotation key mapping you may use your microphone webcam and many others if you want to use Andy android emulator for the personal use it is absolutely free. If you want to run any business then for a pro version the plan started for $12 per month and for one year plan just $99.

Blue Stacks which is the best known Android emulator and was recently updated to android nougat. It has a keyboard, mouse, and gamepad support along with the ability to run multiple apps side by side. This emulator targets gamers a quick look at the user interface you’ll see that we’re in the app center which lists recommended apps along with popular.

Top-grossing and trending in the right pane along the top you can access my apps which will show apps that you have installed. If you need assistance you can go to the Help Center and to the right of the Help Center is Piku world which is there in platform reward currency system where you can redeem points for physical and digital goods in-app purchases and can be used to update skins.

I personally find the pika world to be more of a nuisance with its constant notifications. Tabbed interface is a cool feature when opening an app it opens in a new tab this makes it easy to run multiple apps at the same time. Compared to most emulators BlueStacks is bloated so it may not run smoothly if you have a PC with lower system specs or an older computer.

Anyone can use loose ads for free with no limits but they do charge a fee to remove the ads which vary depending on your region at last check here in the United States the fee was $2.00 per month in the runner-up spot.

We hope you guys enjoyed this tutorial and found the best android emulators. If you feel that this content helps out you then share it with your friends who love to play android games on PC or MAC using emulators.

If it helped you out if you use another android emulator not mentioned that you think others should try out let me know in the comments.